The end nears for Walter White of ‘Breaking Bad’ 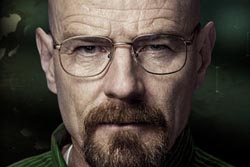 Tell that to Vince Gilligan, the creator and executive producer of “Breaking Bad,” who believes his main character, high school chemistry teacher turned meth dealer Walter White, should go straight to hell. That is, if there is one.

“I’ve got to believe there’s a hell because I can’t stand the thought of Adolf Hitler, Pol Pot and Idi Amin, you pick your poison, dying in some bed with satin sheets in Saudi Arabia,” Gilligan said over a recent late lunch at his Burbank offices. “I just can’t stand the idea of these people going unpunished.”

Do you think Mr White will go to hell? And what about Jesse? As for Gus…

Martial Solal and Sidney Bechet have been samazed!
The Inconvenient Truth Behind the Diaoyu/Senkaku Islands