'The problem was that Sorkin did too much (pedantic, predictable) telling and not enough showing' 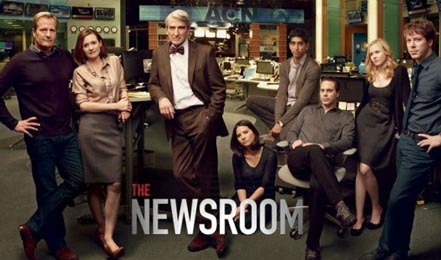 Even though I enjoyed watching Season 1, it wasn’t perfect. Andrew Romano explains it perfectly on The Daily Beast. And apparently, the best is yet to come in Season 2!

The effect is revelatory. Once McAvoy & Co. are no longer forced to serve primarily as mouthpieces for their creator’s political views and mechanisms of his journalistic tsk-tsking, The Newsroom’s virtues, many of which were in place from the beginning, can finally shine through. The dialogue is crisp, chiseled, and often very funny. Characters are undeniably alive, despite their quirks. (Emily Mortimer’s MacKenzie McHale, for example, will still irritate viewers who found her ditziness in Season 1 demeaning.) The acting is (mostly) excellent. Sorkin saved The Newsroom by transforming it from a show about how other journalists were wrong into a show about how his journalists struggle to get it right—and how hard that can be. For those of us who were rooting for the series from the start, this is very good news.

Full article on The Daily Beast.