This is a fantastic news! The Norwegian Nobel Committee has decided that the Nobel Peace Prize for 2015 is to be awarded to the Tunisian National Dialogue Quartet “for its decisive contribution to the building of a pluralistic democracy in Tunisia in the wake of the Jasmine Revolution of 2011.”

The National Dialogue Quartet was formed in 2013 and comprises four organizations in Tunisian civil society:

The Norwegian Nobel Committee explains what motivated their choice:

“The Quartet was formed in the summer of 2013 when the democratization process was in danger of collapsing as a result of political assassinations and widespread social unrest. It established an alternative, peaceful political process at a time when the country was on the brink of civil war. It was thus instrumental in enabling Tunisia, in the space of a few years, to establish a constitutional system of government guaranteeing fundamental rights for the entire population, irrespective of gender, political conviction or religious belief.”

It is a very good choice and it highlights the strong commitment of the Tunisian civil society in building the aftermath of the 2011 Revolution. Wided Bouchamaoui (UTICA), Hocine Abassi (UGTT), Abdessetar ben Moussa (LTDH) and Mohamed Fadhel Mahmoud (Ordre National des Avocats de Tunisie) are representing the quartet and they deserve this price for their hard work, congratulations for what their achievements! 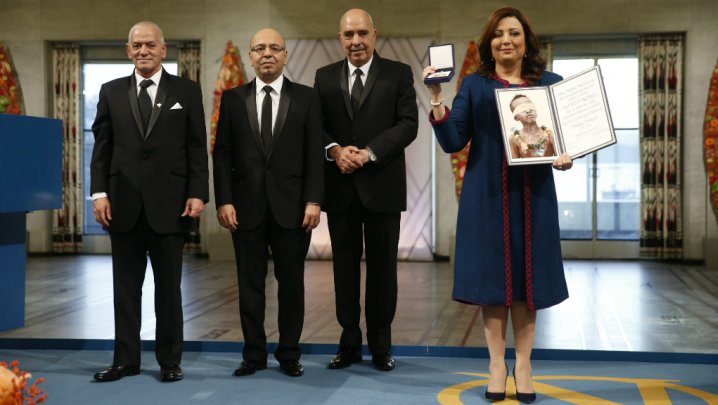