Some movies inspired my creativity and made me write my first short stories. Scarface is definitely one of these great movies that changed my life. I was a young teenager and it was a real shock to me, maybe I wasn’t ready (too young) for such a movie and that’s why I remember it so well. Since then, I watched it again a couple of times and always got into it, waiting with anxiety the chainsaw scene. Al Pacino‘s play is memorable, both flawed hero and cruel villain, becoming his own worst enemy. And the acerbic and classy Elvira played by Michelle Pfeiffer is still one of the most beautiful woman in the world.

Oliver Stone (screenplay), Brian De Palma (direction), Martin Bregman (production) and Al Pacino is the winning quator for this cult classic gangster movie. That was the first impact. At this time, I didn’t know Scarface was a remake of the 1932 Howard Hawks gangster film, and I had to see it; that’s when arrived what I call the second impact. I realized how good was the novel written by Armitage Trail and the screenplay by Ben Hecht. Tony Camonte and Tony Montana are the same, different time, different deals but the characters are very similar, both remarkably played by Paul Muni and Al Pacino.

If Elvira is not Poppy (Poppy seems to be seduced by Tony Camonte, Elvira is definitely not by Tony Montana), both movies succeed in getting you into the story, the raise and the downfall of the Tonys. The last scene differs but gives the same feeling: Tony decides the way he wants to fall. Both films were supposed to be censored but after several cuts, Howard Hawks and De Palma finally released their work uncensored. Scarface is entertaining and is a masterpiece, almost three hour long for the Scarface remake but it’s worth it.

So it came as an evidence I had to samaze Al Pacino in Scarface; fans will notice no ‘yayo’ but an ‘X’ on my work below. 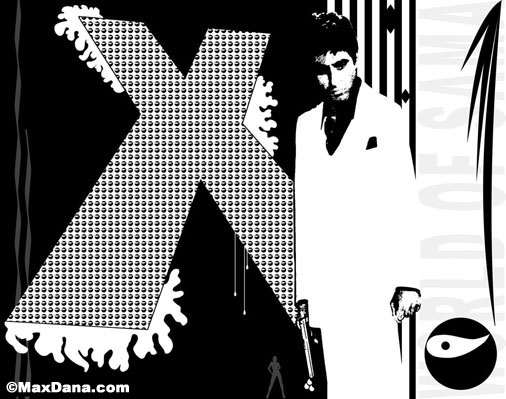 When I heard Hugh “Peanuts” Whalum, I closed my eyes…
Game & Watch: 60 grams of happiness