Pierre Soulages: black like you never saw it before


I have always loved the black color, much to the despair of my family and friends who thought I may probably have some sort of psychological problem (a teenager wearing black is always so suspicious…). But I liked the color very much and still do (I am still wearing black but now it raises much less suspicion). When I was young, I never really cared about what other people were thinking about my all black outfit and its supposed meaning; I considered the black color being the source of everything. Then someone unexpectedly confirmed I was right to think black was a color like any other, and maybe even more than that. This someone was French abstract artist Pierre Soulages, also known as ‘the painter of black’. It was in the late 80s when I first saw one of his paintings on television, it was a diptych and the reflection of light on the striated surface of the black painting gave it a luminous color, almost bright. Like Soulages says: ‘… When light is reflected on black, it transforms and transmutes it. It opens up a mental field all of its own…’. So true!

Since then, supported by the respected work and reassuring words of this great artist, I considered black as a beautiful color and the World of Sama I created, in black and white, didn’t need any pink, red or blue to exist. For years I remembered this moment when I thought: ‘Black can be bright, black is a luminous color!’ but until recently, I didn’t have the chance to experience Soulages‘ ‘transformation and transmutation’. Since October, the Pompidou Centre in Paris is putting on a large scale retrospective to celebrate the work of the greatest painter on the current French scene. I couldn’t miss this exhibition ending on March 8. I knew that to fully appreciate Pierre Soulages‘ work I had to see it by myself and live it. After all these years (almost two decades!), I could finally see with my own eyes what had such an impact on my creativity. I am often asked what inspires me, Soulages is definitely a big part of the answer.

The exhibition brings together over a hundred major works dating from 1946 to the present day, from the striking walnut stain works painted between 1947 and 1949 to the paintings of recent years, most of them shown for the first time. I was eager to experience Soulages‘ work. For so many years I heard people who didn’t even see his work, say: ‘Black is black. You can’t get anything out of this color!’. Or: ‘There is the International Klein Blue, and Soulages’ black paintings. They are just colors’. Like it was only about colors. Soulages‘ work is about letting you see what you want to see, it is about texture and light. Striations of the black surface allow the light to change our perception of black. Depending of the standpoint of the viewer, the color changes, evolves and transforms. Soulages uses striations to bright luminosity but it is also a matter of mixing flat/matte black and shiny black. Pierre Soulages‘ work truly goes ‘Outrenoir’ (Beyond Black).

Seeing Soulages‘ panels, diptychs and polyptychs was an immersing experience. I could feel the color, it was vibrant, changing. His work is untitled but dated and my favorite ones are 02/08/1992, 03/19/1979, 03/17/2000, 04/22/2002, 02/24/2008, 05/22/2002, 01/17/2009. This fantastic retrospective brought me 20 years back, when I discovered Soulages‘ paintings. For two hours I went on an initiation journey, stopping in front on every panel, observing, studying and taking time to see the brightness reflecting on the striations, and appreciate the many different aspects of the presumed ‘non-color’. What I experienced was profound because it is part of the ‘black style’ I have in both my life and my work since I am a teenager. Black has always been a source of inspiration to me and it was amazing to see the work of Soulages who mastered in showing black like no one else did before.

The retrospective at Pompidou is expected to travel to the U.S, so more people will be able to see it. I really encourage you to live this unique experience. I could talk about Pierre Soulages and his work for hours, so I think I should conclude with a statement made by the artist himself that provides a beautiful answer to the recurring question I am asked so often:

‘Why black? The only answer, which covers the unknown reasons that lurk in the obscurest regions of ourselves and to the powers of painting, is: BECAUSE’. –Pierre Soulages, 1986. 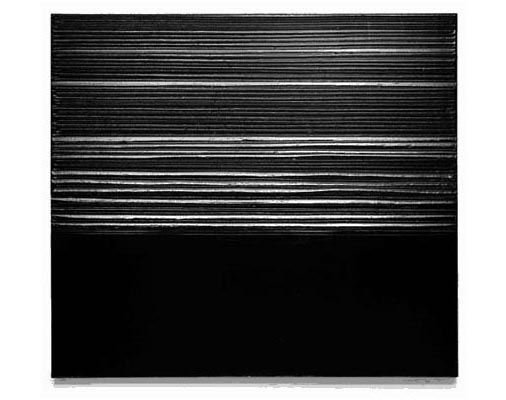