Tunisia : the revolution of dignity and freedom is spreading


Immediately after Mohamed Bouazizi’s self-immolation, I wrote about the event and the protests that followed in Something is wrong in Tunisia. If some people out of Tunisia were ‘surprised’ by the escalation, it came as no surprise to me, knowing what Tunisians have been living for decades under Ben Ali’s dictatorship and massive corruption (made public by Wikileaks). A couple of months have past and a lot of things happened since the protests started.

Wikileaks only 'helped fuel the anger'. Anger was there for decades… @loic Wikileaks Cables had a huge impact on Tunisia's leadership change

Ben Ali has been ousted and fled to Saudi Arabia. After anti-Ghannouchi protests, Béji Caïd Essebsi replaced him. In the mean time, demonstrators keep defying the government imposed curfew and fight for democracy despite some calls for re-establishing the Islamic caliphate… I was preoccupied last year because I knew something had changed with Mohamed Bouazizi desperate act (he died last month) and what was qualified as just an ‘incident’ has become a revolution that is spreading beyond Tunisia.

Baffling some people & even journalists just realize #Tunisia is an authoritarian regime. But politics are the most inexcusable hypocrites.

In Egypt, people went down the street on National Police Day to protest police brutality. Some of them, just like Bouzizi did, set themselves on fire. Thousands of people lead by Wael Ghonim filled the streets of Cairo, lawyers (like in Tunisia) joined the protesters, supported by the Muslim Brotherhood hoping to play a role in the aftermath of the protests. Just like Ben Ali when he realized the revolution wouldn’t stop, Mubarak promised political reforms and change but it was not the one he was planning for: Egypt’s parliament has just been dissolved and Mubarak’s resignation was followed by nationwide celebrations.

A hint? "Revolution in Tunisia is revolution in Egypt!" said protesters in Cairo -via @CNN @NickKristof what country is most at risk

The Tunisian uprising started a domino effect: in Egypt but also in Libya : police cracked down on protesters after violent clashes in Benghazi; Algeria where thousands of Algerians are demanding democratic reforms and say no to police state. In Morocco, a young man committed a desperate act of self-immolation. And what is now defined as the Arab Spring may also reach Syria…

First #Tunisia, now #Egypt… Some people bid on which country will be next but it's not a bidding game, lives are at stake. Freedom. Peace.

Change is coming but the populace is paying a heavy price with hundreds if not thousands of deaths. The revolution of dignity and freedom started in Tunisia is not over yet, Tunisians are fighting for change and democracy and they’re facing many challenges. If I’m still preoccupied by the outcome, I’m also optimistic for the country from I can see about the very active Tunisian civil society and promising youth.

Talking about youth, here’s a “The rest will follow” by Sudanese cartoonist Khalid Albaih: Symbolic middle finger gesture representing the Tunisian Revolution and its influences in the Arab world. From left to right, the fingers are painted as flags of Libya, Egypt, Tunisia, Sudan and Algeria. The red-painted hand may be interpreted as a symbol of revolution (from Wikipedia). 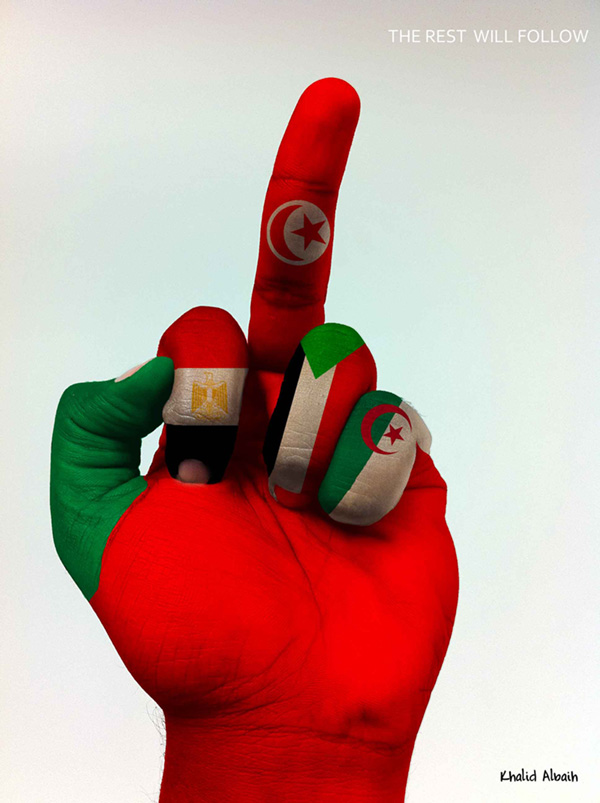 South Sudan and Sudan; news roundup about the complex, intertwined situation
South Sudan: how we all fell for the ‘big lie’
Abyei Referendum: Sudan wants is oil, South Sudan wants its people
Nick Kristof, Sheryl Sandberg about Women
Martin Luther King Jr. and Obama’s election: Free at last? (2)
The revolution in Sudan and the ‘villains’
Sudan: divide and rule, the winning strategy
In Sudan, Seeing Echoes of Darfur. And still waiting for diplomacy…
Syria: against mass killings, but business comes first. Always.
South Sudan: Render unto southern Sudanese that which is theirs