Jean Dujardin (Best Actor) did it. Michel Hazanavicius (Best Director) did it. And all the crew who worked on the film can be proud (Best Costume Design, Mark Bridges; Best Original Score, Ludovic Bource), they did it too! “The Artist” is the first silent and foreign film that has won the Oscar for Best Picture in more than 80 years… And Dujardin is the first Frenchman ever to win the Oscar for best actor. Far from me the idea of being chauvinistic but at least we can enjoy this great success!

Roger Ebert even titled his article “The Artist” and “Hugo”: A very French Oscars (he could have also mentioned Woody Allen’s “Midnight in Paris”), adding ‘It was like an episode from “The Twilight Zone.”‘. Lou Lumenick was being witty when he tweeted: ‘How THE ARTIST won Best Picture — pretty much by default’. On his article published on the New York Post, he writes: ‘It is not a film for the ages, but for the academy this year, it was probably the least objectionable choice — if a thoroughly baffling one for most Americans.’

Nathan Pippenger on the New Republic asks: “The Artist” Won Best Picture, But Does That Mean Anyone Will See It? The author argues: ‘But even though it was the favorite among the Academy types, “The Artist” is probably unfamiliar to many moviegoers: It didn’t even come close to being a top-grossing film last year. Will last night’s big win translate into bigger business for the movie?‘. I’m not sure but let’s hope so!

In an article (Chicago Sun-Times), Roger Ebert explains: ‘Hollywood has the same problem with the Oscars that the Republicans are having with their primaries. They can’t seem to agree on a candidate with a broad appeal to the base. All nine Oscar finalists were, like Mitt Romney, good enough to be nominated. But none of them appealed to average multiplex moviegoers, just as it’s said Romney doesn’t appeal to the GOP base.’

Ok. Right. However! As a huge fan of the Golden Age of Hollywood which inspired my first -unfinished- book, I think that The Artist deserves all of its awards (I explain why I like the movie so much in: Hollywood’s Golden Age is back with The Artist). And my friend da-eYe can’t agree more. He even thinks he IS The Artist and had no scruples uncrediting Jean Dujardin and put his name instead… da-eYe is so George Valentine, isn’t he? 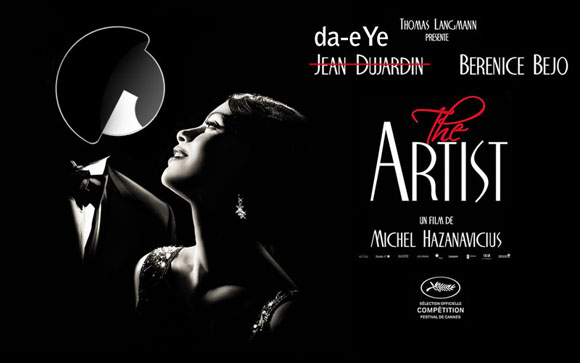