Or maybe it is… de Blob is a platform puzzle video game released on September 22 for the Wii. And for a week now, I am receiving emails from ‘friends‘ (are they, really?) telling me I should hire de Blob to restore color to the structures and inhabitants of the monochromatic Chroma City World of Sama, to ‘save them from a future without color‘. Do I look like Comrade Black? Am I an evil soldier of the monochromatic I.N.K.T. Corporation?

No way! Jeez, why a black and white world couldn’t be fun? The World of Sama actually is cynical fun, the Sama care about human beings and their life is entirely devoted to protect humans against colors dangers. I don’t need de Blob to splash colors around and mess with the beautiful black and white World of Sama! The guy is a crazy ball of clear water, rolling and jumping every which way, mixing colors with creativity no talent and making some weird ‘jazzy’ sounds… 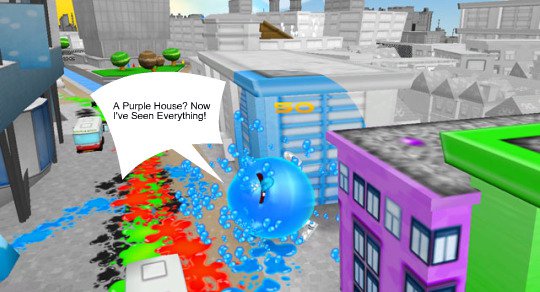 But I have to admit: de Blob the video game is great. A mysterious package has been delivered two days ago at my office, a ‘friend‘ sent me the video game with this message on the card: “Color is NOT a crime!“, and after a few minutes playing with de Blob, I really enjoyed the game. It is a fun 3D platformer with a great gameplay and many challenges. Blue Tongue developed one of the best third-party Wii games to date, but even so this doesn’t mean I am now into ‘colors’.

Talking about video games, I wish I could put back on track the video game parties I used to host (Call of Duty 4 and Halo 3 video game party tonight!), I miss them. I am now over WoW but Red Alert 3 is on schedule for release at the end of the month and I am very excited about Diablo III but -fortunately- it won’t be out before Q2/Q3 2009. I also have this project about a video game I worked on last year but it is far from being completed.

Hot news: the Nintendo DSi (the successor to the DS Lite) has a camera, a digital music player, a larger screen and a web browser and it will be released on November 1 in Japan. It kind of inspires me for this video game project I have. I will let you know ^_^

A few pages of my movie script / book, for your eyes only!
Original Fake Kaws Cat Teeth Bank against global crisis