Romy Schneider, an everlasting star has been ‘Samazed’


In February I presented you my last work, the ‘Movie Stars’ series of portraits (Cary Grant, Angelina Jolie, Sean Connery, Marlene Dietrich… Samazed!). Since then, you commented abundantly about this series and I received a lot of emails; so I think it is time to show you one of these portraits. I chose an Austrian-born German actress who also held French citizenship: the great Romy Schneider.

This May is the 27th anniversary of her death, so I thought it would make sense to publish her portrait. She was one of the most beautiful women in the world (and still is to me) and one of the greatest actresses of all time (yes, I mean it). If you ever had the chance to see one of her movies, then just pick one: The Swimming Pool with Alain Delon, César et Rosalie, Le Vieux Fusil with Philippe Noiret, The Woman Banker, Max and the Junkmen… There are so many! She has appeared in films by Orson Welles, Jules Dassin, Claude Sautet, Costa Gavras, Luchino Visconti, Terence Young… If you want to know more, read some of the biographical articles on the Internet and watch her movies, you will get my point right away.

Something very special emanated from her: beauty, sadness, determination, strength, some sort of a frailty of her own too. I am not going to give details about her personal life but it is also part of what made her what and how she was. Her whole life has been an inspiration to me when I worked on her portrait. She died in May 1982 and I was way too young to remember it, but I have seen many of her movies before I was 20 and she is definitely one of my favorite actress. So it comes as no surprise I decided to ‘Samaze’ her by making her portrait. I publish it today on this blog but it is kind of ‘exclusive’ because it will be part of my next exhibition later this year.

For those who would like to know more about Romy Schneider, a movie about her life titled: ‘A Woman Like Romy’ is on its way with Yvonne Catterfeld to play the legendary Austrian-born icon. Catterfeld already looks a lot like Schneider, let’s hope the movie will have the same level of credibility. Many fans are waiting for it, so the stakes are high!

This portrait comes with a comment, it originally is in French and I left it this way. If you are not French-speaking, you can try to translate it 😉 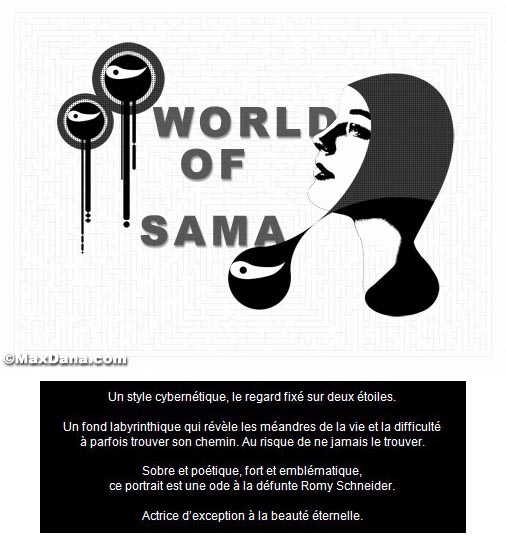