As you probably already know, I don’t like being on photos but I do like take photos. Then I samaze them which means I draw (using my computer or a pencil) some elements from the World Of Sama onto them. The result is like real world incorporated into a weirdo world, in black and white. Lately I came to Trouville sur Mer (Calvados, France), a beautiful french town, a bridge away from Deauville, a city mostly known for its casino, the beach where the great movie from Claude Lelouch: ‘A Man and a Woman’ (Un homme et une femme, 1966) was filmed and of course, for the Deauville American Festival (in September).

Trouville and Deauville are separated by a bridge but sometimes it looks like there is a world between the two cities. One is believed to be hype and the other one more typical; I like both cities even if Trouville is my favorite place and this is the reason why I came in town recently. It was in the middle of the week, off-season and rainy but it was exactly what I was looking for. Nobody was on the beach, no sign of life on the ‘planches‘, no sun and it was windy; I loved it. It was the perfect place and the perfect time. I walked for nearly an hour, took 30 photos and on my way back, I came to that great bakery on Boulevard Fernand Moureaux.

I don’t take photos from every place I go, sometimes I feel like I can capture some interesting moments, and I shoot. You don’t have to go far to take great photos. I’m still working on these photos from Trouville and I will likely publish some of them here when I will be done. Below, a glimpse of the first photo. They will surely be part of my next photos exhibition.

I don’t know which is the next city I will samaze, prolly London or New York. I’ll decide when I’ll be there! 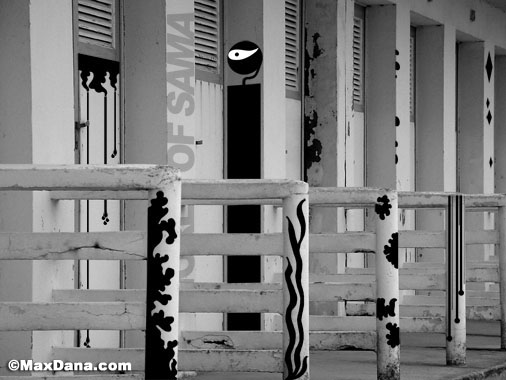 Electronic Entertainment Expo (E3) : gone with the babes…
Polenta, aceto balsamico, parmigiano and so much more