It has already been a year. Time goes by so fast… The “60 Signers for the 60th Anniversary” Initiative is already a year old but it is like it was yesterday. It was a great experience and I had the opportunity to meet with very interesting people. The heads of the organizations who signed the initiative such as:

Everything started with a modest idea and it became something much bigger. This personal project has become a collective one, aimed to make people think about Human Rights and make them realize how important it is to fight for them. There were the important people from the organizations but also the ones you don’t see on television. The ones who work in the field and for whom I have so much respect for. Some of them also signed the artwork I created and I was very proud they accepted to. They know what Human Rights are about, they know what is happening when they are not respected, ignored. They tend wounds, they give hope. So many people are suffering in the world, it is sometimes hard to realize we (and I count me in) don’t do muchenough to change what we see. Some courageous ones deciced to act and we should be respectful of their strong desire to make a better world. It may sound banal and stating the obvious but if we seriously think about it, isn’t it much easier to do nothing and criticize than take our responsibilities and take action? We all know it is.

A few days ago, the Sama Team posted an article on the Sama Gazette: International Human Rights Day 2009. The many comments prove this is a hot topic. This year the Every Human Has Rights Campaign was not as active as it was last year for the 60th anniversary of the Universal Declaration of Human Rights but it is still up to date. CIVICUS has taken the lead of the campaign initially launched by The Elders. I hope they will keep it alive, last year showed us how people can mobilize themselves to support Human Rights; we should never stop! 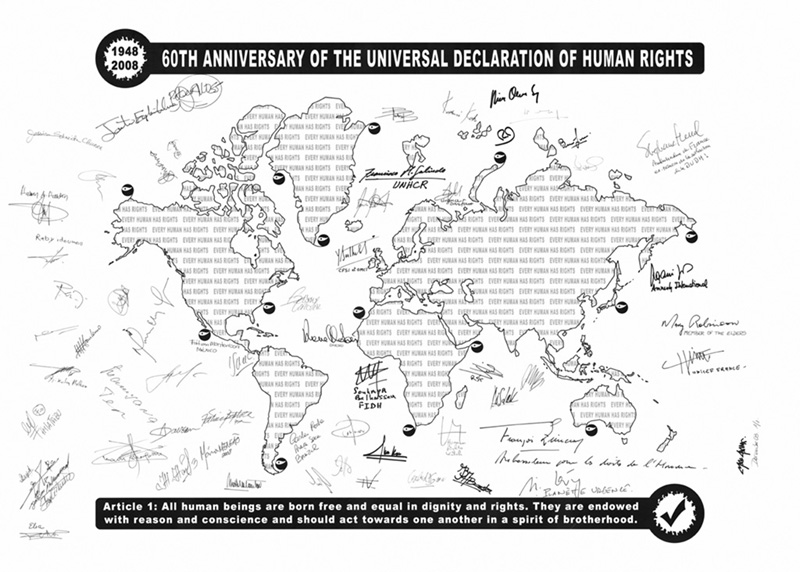 Pete Fowler ‘The Needle and The Damage Done’
L’Appel pour une Tunisie des Libertés
Martial Solal and Sidney Bechet have been samazed!
da-eYe is growing a moustache for Movember!
da-eYe: the ‘Sea, Sex and Sun’ postcard
Kids coloring da-eYe!
da-eYe is back on the wall of Serge Gainsbourg’s house
da-eYe: looking for Banksy at the 2011 Oscars
da-eYe strikes the Wendy Brandes Pose — Literally
da-eYe will go barefoot against poverty on Dec.10, will you?