da-eYe is back rue de Verneuil. But this time, virtually. When Serge Gainsbourg died on 2 March 1991 of a heart attack, I was among the ones who came at his home rue de Verneuil in Paris and wrote or drew graffiti on the outer wall of Serge Gainsbourg’s house. I drew a da-eYe and it was one of the last time I did. I have always considered Gainsbourg as one of the best (if not the best) French singer-songwriter. It was a great loss.

I could mention several of the many songs he wrote, from ‘Le Poinçonneur des Lilas‘ to ‘Love on the Beat‘, ‘Valse de Melody‘ and of course the reggae version of the French national anthem ‘La Marseillaise‘, and so many unforgettable other songs… But what I’m the most interested in is his paintings. Even if he never become a renown painter, I’m sure he expressed some of his most profound feelings which have been later expressed using music and words.

Earlier this month, we celebrated the 20th anniversary of the death of Serge Gainsbourg. On this occasion, French social media website OWNI created an online app so we can ‘write’ on the wall of Serge Gainsbourg’s house. Virtually, that is. I think it was a great idea and I used the app as a background to create my own wall with da-eYe on it. I didn’t go back at the 5 bis rue de Verneuil for a decade, those days are over now and I feel kind of nostalgic…

If you want to know more about Serge Gainsbourg, a feature film titled ‘Gainsbourg (Vie héroïque)‘ was released in France last year. It is based on the graphic novel by Joann Sfar. Definitely a most see! 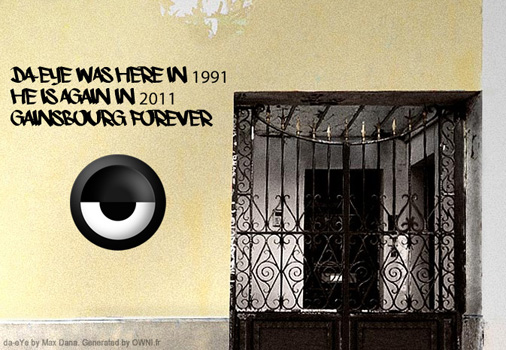