MD Blog > da-eYe will go barefoot against poverty on Dec.10, will you?
In: Works / Projects Tags: CIVICUS, da-eYe, Every Human Has Rights, Human Rights, Sama Gazette, The Elders
By Max DanaShare:

da-eYe will go barefoot against poverty on Dec.10, will you?


I have been supporting Every Human Has Rights Campaigns since 2008. It started with the ’60 Signers for the 60th Anniversary Initiative’ I launched on November 24, 2008. My first post about it explained why I decided to ‘go public’ by creating an original piece of art for the campaign. Six months after that, the 60 Signers for the 60th Anniversary Initiative was fulfilled. It was quite an adventure and a great experience to meet with the Paris-based representatives of the most important organizations in the world.

In 2009, I wanted to celebrate International Human Rights Day with ‘ordinary’ people doing extraordinary things. We talked about Human Rights, they shared their stories and as usual when you sit down with volunteers and aid workers, you feel humble and so respectful for their dedication and commitment. A great lesson of courage and a very enriching afternoon with people from all walks of life. We certainly don’t have to wait for Human Rights Day to fight for Human Rights and to thank the people defending them everyday.

This year, I enrolled the Sama Team from the Sama Gazette, so we can take action together. The new Every Human Has Rights Campaign is titled: ‘Barefoot Against Poverty‘. The pledge: ‘Because I believe the fight against poverty begins with the fight for universal human rights, I will become a barefoot warrior against poverty on 10 December‘. We liked the idea and decided we would all go barefoot on December 10. Plus, since December 2, one of the member of the Sama Team is supporting the initiative: ‘One pair of shoes for a month’.

But I also wanted to help spread the word in a creative way. I chose one of my characters, the charismatic da-eYe who has been following me since the mid-Eighties. He is facetious and waggish, renowned for his repartee but also for his witty sense of humor, and his charming and easygoing nature. He agreed (well, he didn’t have much of a choice, really) to go barefoot on December 10 and on his website, he invites everyone to sign the pledge. Help him spread the word, challenge your friends, family, co-workers and neighbors!

A final note. I have heard some people and read some skeptical comments on the idea of going barefoot against poverty (you know, the redundant question: ‘What for?‘). Even if I have to admit I didn’t get the purpose of the campaign right away, I think it is important we take our responsibility as human beings and citizens of the world in raising awareness about Human Rights. Whether it takes you to go barefoot once in a year or to commit more actively; you have the choice to decide what you want to do and many options are offered to you.

Going ‘Barefoot Against Poverty‘ is simple and won’t cost you much of your time or money. 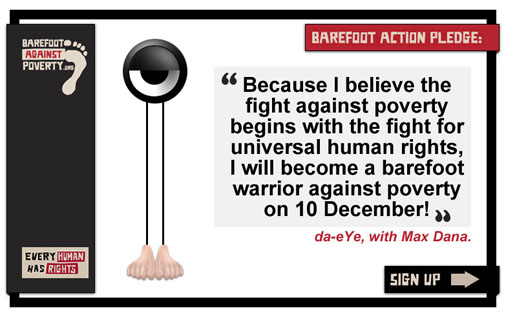 Pete Fowler ‘The Needle and The Damage Done’
Martial Solal and Sidney Bechet have been samazed!
da-eYe is growing a moustache for Movember!
da-eYe: the ‘Sea, Sex and Sun’ postcard
da-eYe is back on the wall of Serge Gainsbourg’s house
da-eYe: looking for Banksy at the 2011 Oscars
da-eYe strikes the Wendy Brandes Pose — Literally
Third anniversary already? Time passes too quickly!
Sama Sun and tiny Sama fresco drawing from my Moleskine
International Human Rights Day 2009: Every Human Has Rights