I am a big fan of Hello Kitty -now everybody knows about it. It took me some time to accept Hello Kitty cuteness as my interest in the famous Sanrio‘s character only started when I was already an (young) adult. I have never been into dolls, Barbies and other ‘girl things’ but I always had tenderness for Hello Kitty and I even dedicated  her a web page in 1994 which was for years one of the highest ranked websites. Yuko Shimizu is the one who created the little kitty with the hair bow in 1974, and since then Hello Kitty is today more popular then ever. But 17 years ago in France, it was hard to find Hello Kitty products (unlike in Japan or in the United States). There was only one store in Paris and then in the mid-1990’s I had to go on Ebay to buy my bags (most of them were poor imitation…). I wasn’t 10 or 12 years old anymore but I wore my Hello Kitty bags with proud since at this time, I had never met someone wearing one. Everyone (well, mostly women) was asking me where I bought them and I liked to be evasive to protect my sources. I had a lot of fun and I felt kind of unique; I never was into luxury bags and I realized my low priced Hello Kitty purses often caught more attention than the Hermes bag a friend of mine was wearing. But it didn’t last.

In the early 2000’s everything changed. Hello Kitty started to be everywhere, every little girl I knew had her Hello Kitty backpack and new collections for women were released. I was not the only one to have a Hello Kitty bag anymore, I was like everyone else as everyone else could instantly find in almost every store, the Hello Kitty products it used to take me weeks (and cost a lot) to find. This is when I stopped wearing my Hello Kitty bags, purses, scarves… But then I heard about Tarina Tarantino‘s Hello Kitty pink head collection and I bought several of the designer’s jewelry; I still wear the necklaces featuring Hello Kitty with fuchsia hair and because it was a limited edition line, not everyone has one. I can be unique again, on great occasions only. Tarantino created great Hello Kitty (custom) jewelry but other designers jumped on the Hello Kitty bandwagon, like Victoria Casal with her ‘Hello Kitty by Victoria Casal Couture‘ luxurious line.

Hello Kitty celebrated its 35th Anniversary last year, and in 2010, it is Sanrio 50th Anniversary. On this occasion, the Japanese company is having a nationwide celebration including two events in Los Angeles (Small Gift Los Angeles, November 12-21, 2010) and Miami (Small Gift Miami, December 2-5, 2010), plus a mobile pop-up shop tour (Small Gift Mobile Pop-Up Shop Tour, October – December 2010) travelling across the United States. But the most interesting about this celebration (besides the fact Barker Hangar in Santa Monica is a real Ali Baba’s cave for any Hello Kitty fan) is that contemporary artists were asked to interpret their vision of Hello Kitty in one-of-a-kind pieces of art that are now for sale and on display throughout the duration of the ‘Three Apples’ event. My favorite pieces of art (listed here) are from artists Lola, Travis Louie, kozyndan, Eric Joyner with a special mention for Gary Baseman ‘Garden of Sanrio Delights‘, Joe Ledbetter ‘Hello Bunny‘ and Junko Mizuno ‘Sanrio Dream‘.

Sanrio knows how to get creative and keep its fan base interested. I wish there was such an event in Europe! For the occasion, I quickly made a ‘Sama-Kitty‘ wearing a red bow. 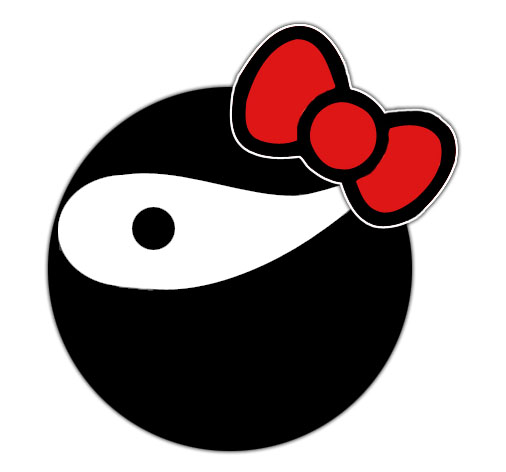