MD Blog > Will the World of Obama ever become a reality?
In: Misc., Works / Projects Tags: Barack Obama, Samazed
By Max DanaShare:

Will the World of Obama ever become a reality?


Two years ago, I decided to work on a portrait of Barack Obama. At this time in France, he was barely known as the Senator of Illinois, with almost no chance to win the Democratic presidential nomination against Hillary Clinton. His portrait was part (and still is) of a series of mixed media work (photos and drawings) I started in 2006 called: U.S Presidents (a.k.a the ‘U.S past and wanna-be Presidents’), including JFK, Al Gore, Bill and Hillary Clinton and Barack Obama (JFK, Gore, Clinton and Obama into the Sama Family). Four different portraits, each personality pictured as seen through the World of Sama glance. The portrait of Barack Obama is part of that series, and it was never meant to politically ‘support’ the Democratic candidate to the White House. But if my approach wasn’t strictly political, Obama definitely inspired me, as well as the other personalities pictured in the series, each one for different reasons of course.

I published the portrait on this blog a year and a half ago, it had its own life on the Internet and since then I received many emails about it. A gallery in Australia contacted me because they wanted this portrait for an Obama Art show, another one in London was also interested into my work and asked me if they could title the show: The World of Obama(not the first time it was suggested to me). I have also been contacted by people who work on conferences, write books, artbooks and even thesis about Barack Obama; some others were just curious to know if I made this portrait because I was an Obama supporter. I have even received keychains, mugs, tshirts and other goodies from Obama supporters (and from waggish friends too). I have also been told this portrait has become emblematic for supporters of the Democratic candidate at an American university. And last month, a journalist contacted me and she wanted to know if I had a statement to make about the campaign… A statement? Because Obama inspired me a portrait? This is going too far! 😉

Seriously, since I am not involved in politics in my own country, I am not going to get involved in those of another country. I am not American, I don’t vote for presidential in the United States so I have no right nor legitimacy to make any kind of statement. This portrait was never meant to be an official support to Barack Obama neither it is an endorsement to his campaign, and I didn’t follow up on the inquiries for this portrait to be part of a political show, exhibition or event. Obama is inspirational and many artists did great piece of work about him, some are even openly supporting him. But as far as I am concerned, I don’t want my work to be classified exclusively as ‘political’, it is too simplistic even though you can have a political (in the broad sense of the word) interpretation of my work because it is clearly about political, environmental and social issues (especially my photographs).

I do have convictions as you may already know (I share many of them with you on this blog) but I don’t think my opinion is so important it could change anything to what will happen on November 4th. And if you are interested into my work and if you know my commitments, it is not difficult to pinpoint what I think on the subject. Most people I know are staunch supporters of Barack Obama and I can understand that, but I am sometimes baffled by the political faith, the cult of personality and the total devotion Obama, McCain and political figures in general can generate. Maybe it is why I can’t support someone in particular, because unfortunately I don’t think a man (or a woman) of good will alone as a president can change everything. But what I know for sure and what I strongly believe in, is that the more thoughtful (no mindless war, no conflict of interest), the more open-minded (no bias, no prejudice) and the more tolerant you are (about our differences such like colors, religion beliefs, way of life, and so on…), the more chances you have to actually make a better world and durably change some of these things that are going wrong in the crazy world we live in.

As for: Will the World of Obama ever become a reality? We will only know on November 4… 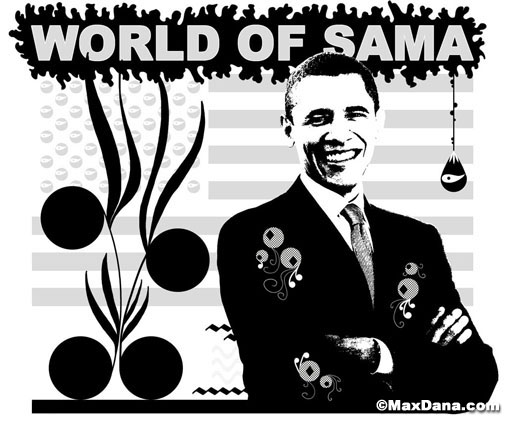 Sunrise in Djerba, Tunisia
Pete Fowler ‘The Needle and The Damage Done’
Government surveillance spurs Americans to fight back
François Hollande : panthéonisez des femmes !
Bill Clinton meets President Kennedy
President Obama’s remarks on Trayvon Martin
‘The American dream has become a myth’
Tesla says it will be profitable by December
The Inconvenient Truth Behind the Diaoyu/Senkaku Islands
Martial Solal and Sidney Bechet have been samazed!