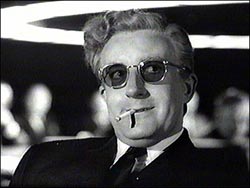 I have a special connection with the movie Dr. Strangelove. I explain why in Dr. Strangelove: Or How I Learned The Power Of Satire. I also use to play a lot with LEGO. So yesterday, when I saw this article on BoingBoing, I had some kind of an epiphany…

Using LEGO and pure genius, YouTuber XXxOPRIMExXX created this amazing stop-motion homage to the great Stanley Kubrick film Dr. Strangelove or: How I Learned to Stop Worrying and Love the Bomb.  The project was originally uploaded in 2010, but YouTube blocked part of it over copyright claims.

“I had to take out the famous scene of Slim Pickens riding the bomb and the nuclear holocaust credits to have this video viewable because those scenes were taken directly from the movie,” the auteur laments. “I was hoping to have the Slim Pickens scene done in Lego by now but I just never had enough time or effort to do it, maybe some time in the future. Enjoy.”

Now you’ve read the news, let’s get down to business with the video -Part1 & Part2!

Scarface: The (bad?) idea of a ‘third’ impact
Remembering Carrie Fischer on Star Wars Day
The weirdest-looking time machines in all Science Fiction
Filming on the Fringe
Star Wars Medley by Lindsey Stirling and Peter Hollens
Making a Real Life-Size Wall-E Robot
Fast cars and Hollywood stars
da-eYe is The Artist
Hollywood’s Golden Age is back with The Artist
Scarface, The Twilight Zone and Blade Runner -Again