When I heard Hugh “Peanuts” Whalum, I closed my eyes…


I like jazz, mostly ‘old jazz’ as many would say. When I draw, I listen to these beautiful voices from the past such as Dinah Washington, Ella Fitzgerald, Sarah Vaughan, Billie Holiday, Dinah Shore but also Tony Bennett, Frank Sinatra (and Dean Martin), Nat King Cole among many others. I’m also listening to more recent and varied artists like Luther Vandross, Michael Bolton, Harry Connick, Jr, Diana Krall, Robin McKelle, Norah Jones…

I know Kirk Whalum for a long time, obviously one of the most influential contemporary saxophonist of his generation and last year I was browsing the Internet about his latest album. I got to his Myspace page and then I read something about a mysterious 75 years-old Hugh “Peanuts” Whalum. One click away and I was on Peanuts Whalum’s Myspace page. The Real Three Tenors started to play while I was reading with much interest the introduction note written by Kirk Whalum: “There I was sitting with my uncle Peanuts, who’s literally a legend in a kind of musical microcosm… someone who’s played with Nat King Cole, Miles Davis and Ella Fitzgerald…“. Hugh “Peanuts” Whalum is nothing else but Kirk Whalum’s uncle and a great tenor saxophonist and pianist, and Rendezvous Entertainment signed him for his first-ever record; Kirk Whalum produced it.

I was wondering how I couldn’t have heard about him before and then started the song: I’ll close my eyes. And so did I. I stopped reading and listened to every word like this song was all new to me. Actually it wasn’t, I already knew it sung by Dinah Washington but it was totally different. It wasn’t a copy, it was Hugh “Peanuts” Whalum’s velvet voice and his very own phrasing, singing this beautiful song, his own way… I had to get his CD as soon as possible but things were not that simple to find the Rendezvous label in stores. I called many of them and only one had it: “Come and make a personal order, we’ll receive it within 2 to 4 weeks“. It took me 2 months to get it during which I went almost everyday on Peanuts Whalum’s Myspace page, clicking again and again on the audio player to listen to the songs.

The day I eventually got this CD was rainy and I cared it like it was a relic; back home I listened to the whole album and had a great surprise to hear songs like I Can’t Help Falling in Love, It’s always Four A.M, I Don’t Know Why… It really highlighted my evening. Here are some words taken from his Myspace page: “It’s a fitting close to an album that is, in all respects, heaven to listen to. Hugh Peanuts Whalum is a secret that can’t be kept any longer. If his reputation reaches as far as his inspired talent, he’ll be a legend not only in St. Louis (where he’s considered a local treasure) and with jazz insiders, but also around the world“. So if some of my drawings make you feel like they’re jazz-inspired, now you should know by whom.

I hope I’ll have the chance to see him play and sing live one day. Even if I have to cross the ocean for a same day round trip to Saint Louis! 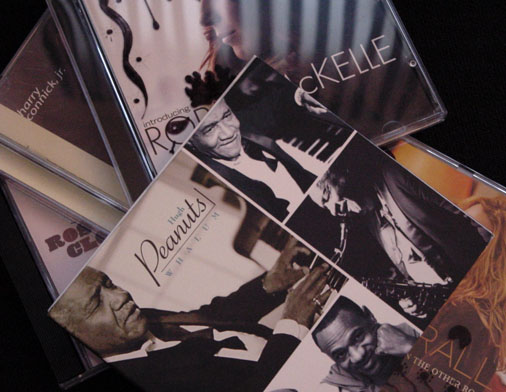