I posted an article about Seen last year: From sgraffiti to graffiti, from Cauchie to Seen if you want to know more about him, and his Mars-1 Observer vinyl figure is surprising. No graffiti Art but a special color scheme; cyan, red and white with a subtle electric circuit pattern on the surface of the figure. The “6” in the center being a reference to Seen’s design company, Planet 6. Boris Tellegen (aka Delta Inc.) is from Amsterdam and his figure is all about colors: red, gray, blue, black and geometry. Delta’s work is said to be a particular favorite of Observer creator Mars-1 and I appreciate both of their work. I suggest you to visit Mars-1 website, his sci-fi paintings are very inspiring and the vinyl figures create accurate three dimensional depictions of the characters we can find in his work; the Mars-1 series but also Observer and Invisible Plan mini figures (Smoking Temple, Mini-Observer, Spaceman…) bring life to the characters first seen on his paintings.

I took a photo of the Mars-1 vinyl figures I have (excepted for the Mars-1 Observer Black and the mini figures which are not on the photo). One of these box is signed by the artist, a very close and devoted friendtold me he went especially to the SDCC to get it directly from Mars-1 (this is what he told me, I have -almost- no reason to doubt it, right?), then he sent it to me as an ‘unexpected’ gift. A few days later, he asked for a Sama drawing in return, so I told him he would have to come to Paris to get one because he won’t find it on Ebay like he did for the signed Observer he got me! Am I right Jake****, a.k.a the highest bidder? Got you! ^_^ 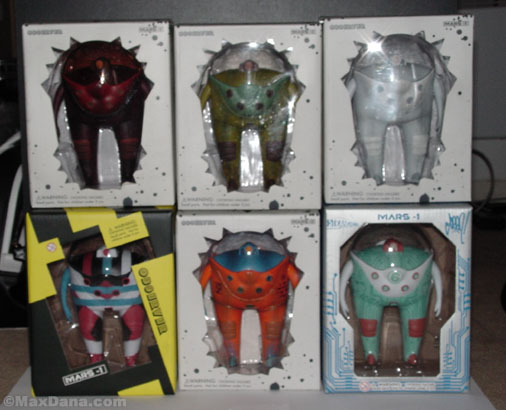