Mythic Miss.tic in Paris (with da-eYe)


This woman is more than that. Miss.tic is a modern legend. I managed to see one of her show in Paris, eventually. For years I admired her stencil work in the streets and enjoyed her clever aphorisms mixing puns, wordplay and double meanings.

I mentioned her in my previous post titled Grandmaster Flash, Seen, Jordans… Remembering the good old days! and each time I see one of her stencils (more and more in galleries, less and less in the streets because of the laws against graffiti), it brings me back to the 80s…

At this time, there were not so many women in the graffiti world but #Miss.tic was there, her female characters were sexy with sometimes suggestive poses. But most of all, they had something to say, about women (and human) condition, insolently questioning our society.

So yes, I am a big fan of Miss.tic’s work and personality. She is a strong woman and she shares her experiences and thoughts in the most creative way. I strongly suggest you to visit her official website (French only) to learn more about her and her latest shows.

As you already know, #da-eYe is also a big fan of Miss.tic and he wanted to pay homage to her so he decided to strike a pose next to a stencil on parpen made by the artist, and exhibited at the Fanny Guillon-Laffaille Gallery in Paris in March 2011. Full size image on da-eYe.com. 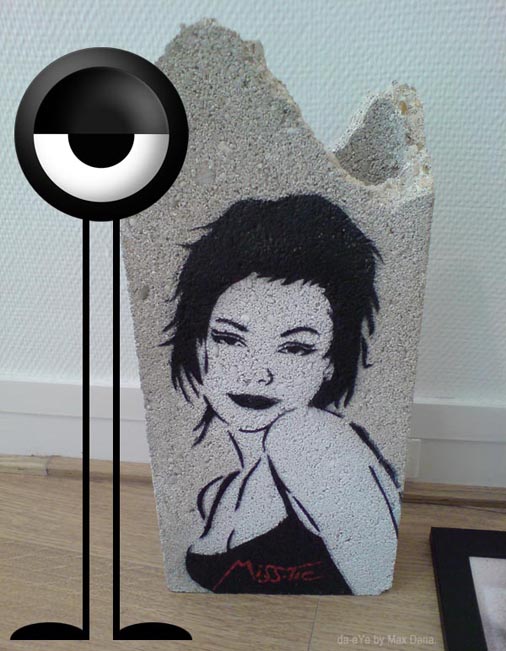