Last November, I launched the ’60 Signers for the 60th Anniversary Initiative’ on the occasion of the 60th anniversary of the Universal Declaration of Human Rights, to support the Every Human Has Rights Campaign initiated by The Elders. As you may have easily noticed, the landmark U.N. document is still not fully respected around the world. This Declaration sets basic minimum international standards for the protection of the rights and freedoms of the individual and I thought this 60th anniversary was the perfect occasion to ‘do something’. My humble contribution consisted in creating an artwork and to invite 60 members of various organizations and personalities involved into human rights to sign the art work, as well as ‘ordinary’ people taking action toward the goals of the Universal Declaration. Easier said than done… You have to be patient to get all the meetings and then organize the agenda to meet them individually. This is why last year and the beginning of this one was quite busy for me because I wanted to be there for every signature, whenever was the meeting. Since my first post in November (read it here), I didn’t talk about the initiative but many of you were asking how it was going on; since it was a ‘personal’ initiative, I did not ‘publicly’ communicate about it so this post gives me the opportunity to share with you the important stages of this project.

Like I said in People of goodwill against the rest of the world? Maybe…, I am more used to meet with ‘simple people’ working for organizations than with ‘upper circles’ but even if some meetings were hard to get, everyone I met was enthusiastic, curious and most of all, concerned about the initiative. Among the 60 signers are Mary Robinson, member of The Elders, and partner organizations: Geneviève Garrigos (President of Amnesty International France) and Jacques Hintzy (President of the French National Committee for UNICEF) but also Stéphane Hessel (Ambassador of France, participant in drafting the Universal Declaration of Human Rights), François Zimeray (Ambassador for Human Rights) and many other organizations such as Human Rights Watch, FIDH (International Federation for Human Rights), UNESCO, UNHCR, OMCT (French Comité for the international solidarity and the World Organization Against Torture), Reporters without Borders, the Collective Darfur Urgency, Planète Urgence… The winners of the Every Human Has Rights Media Awards and Internews, the organizer of the event, signed the initiative as well as; about twenty individuals (doctors, lawyers, volunteers…) supporting human rights through their personal and/or professional activities. I had a wonderful experience meeting with everyone of them and had the pleasure to have rewarding discussions with committed people perfectly knowing their work, with very busy agenda but interested enough by the initiative to take the necessary time to sign the artwork.

Five months later, the initiative has ended, the artwork was fully signed. In April, the artwork has been presented in London, in the presence of Ingrid Srinath, CIVICUS Secretary General and EHHR Campaign, and Katy Cronin, Communications Director, The Elders. The meeting was informal, a convivial moment exchanging ideas, talking about the initiative and various subjects… I really had a great time. Ingrid Srinath had to leave London and the artwork has later been sent to CIVICUS offices in Johannesburg, South Africa. In May, a beautiful photo (see below) was taken with Ingrid and staff members of CIVICUS and it really captured the ‘all together’ spirit of the initiative. In early June, a press release was sent to the signers. My motivation for this initiative has been inspired by the many people I know who are working hard for human rights and by the work of so many ‘unknown’ people upholding the principles of the Universal Declaration of Human Rights. I have been discreetly supporting events and organizations over the years using both my personal and professional networks, but this is the first time I ‘went public’ (some kind of a ‘coming-out’ in my own name I would say…) by creating an original piece of art for this specific occasion. Like I said in another post, Tall oaks from little acorns grow means each and every one of us has the power to take action, each provides its own value at its own level. My ‘area of specialization’ is art and I hope this piece of work will be living for many other anniversaries. ^_^ 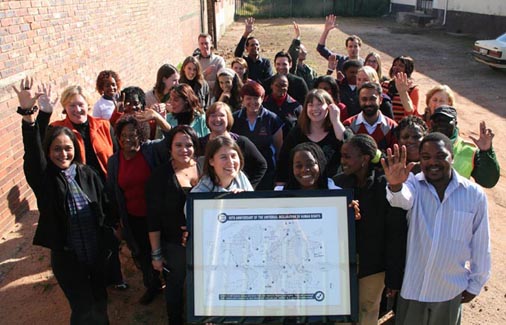 People of goodwill against the rest of the world? Maybe…
A brand new World of Sama Art Website has opened